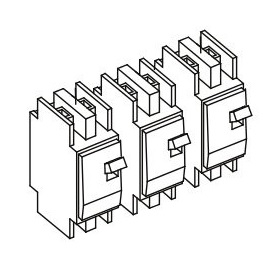 The 60 A, 120/240 VAC Breaker Kit is used for AC distribution for a second or third XW inverter connection to the Power Distribution Panel. If the Power Distribution Panel was ordered with AC breakers, a single breaker kit can be used for connecting two or three inverters. With two inverters, the three additional breakers are used for AC in (grid), bypass, and AC Out (load). With three inverters the breakers in the PDP are used for AC in (grid) and AC Out (load), and bypass functionality would be installed externally (not included).

AC enclosure which mounts at the AC side of three or four FX Series Inverter/Chargers. Supports eight terminal bus bars and one FW-X240 transformer. The FW1000 system utilizes two FW-MPs (mounting plates) and a set of the DCA and ACA conduit adapters for each inverter/charger. DC and AC breakers, Input-Output-Bypass Assemblies and all other additional components sold separately.

Want to Grow Your Off-Grid Installations? Get Help From An Industry Leader

Zonna Energy is a full-service supplier for solar installers across North America and the Caribbean. Why should you source your solar systems from us? Consider the following:

When it comes to keeping your margins wide while increasing your customer satisfaction, your solar energy equipment supplier is a significant factor. Don’t get left behind your competition, choose Zonna to supply your equipment. Our low costs, quick shipping, and expert advice will keep you and your customers smiling from one job to the next. Feel free to call us any time, we would love to chat and discuss your off-grid goals.